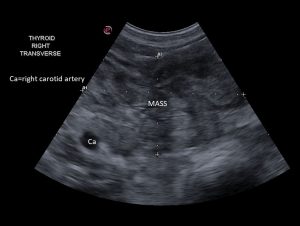 Thyroid carcinoma in the right thyroid lobe of a nine-year-old neutered male Boxer.

Did you know that ultrasound can be used to evaluate the thyroid gland?  Ninety percent of canine thyroid masses are carcinomas.  Other differential diagnoses for a thyroid mass include lymphoma, adenoma, abscess, hematoma, lipoma, and rarely early hypothyroidism.  Sometimes the mass is non-thyroid in origin such as an enlarged lymph node or mucocele.

Thyroid carcinomas tend to be large, locally invasive tumors that can metastasize to the deep, regional cervical lymph nodes as well as the lungs. Approximately fifty percent of dogs with thyroid carcinomas have metastasis at time of diagnosis.

Affected dogs are older with a mean age of nine years.  Over-represented breeds include Beagles, Boxers, and Golden Retrievers.  Thyroid tumors are often not identified until they are large enough to be palpated or cause clinical signs.  Unilateral thyroid gland involvement is more common than bilateral.  Dogs can also develop ectopic thyroid carcinomas cranial to the larynx (base of tongue) and in the cranial mediastinum.  Clinical signs include coughing, dysphagia, regurgitation, respiratory distress, and facial swelling from mass invasion or pressure.  Pulmonary metastases, if present, can cause dyspnea, panting, and coughing.  Other clinical signs include weakness, dysphonia or inability to bark due to laryngeal nerve involvement, and Horner’s syndrome due to sympathetic nerve involvement.  Dogs with functional thyroid carcinomas may show clinical signs of hyperthyroidism such as weight loss, polyuria-polydipsia, and hyperactivity.

A serum thyroxine level (T4) should be performed on all dogs as up to fifty-four percent of affected dogs have elevated T4 values.  Some affected dogs will be hyperthyroid, some are euthyroid, and some are hypothyroid.  Interestingly, radioiodine therapy (I-131) has been reported to be effective in all affected dogs, even if their thyroxine levels are not elevated.

Nuclear scintigraphy, where available, is helpful in assisting with the diagnosis of thyroid neoplasia and selection of an appropriate therapeutic regimen.

The best definitive diagnosis is obtained by performing histopathology on the excised tumor.

Three view chest radiographs should be performed prior to surgery to evaluate for pulmonary metastases.  A full body CT scan can also be considered.

Surgical resection is curative if the mass is small or well-encapsulated, and it is the treatment of choice for small, discreet, moveable tumors.   If the mass is freely moveable at palpation and there are no metastases at time of surgery, median survival times have been reported at three years or longer.  Potential complications of surgery include incomplete removal, tumor dissemination, damage to the enervation of the esophagus, larynx, pharynx, and severe hemorrhage.  Unfortunately, most canine thyroid carcinomas are large and locally invasive at the time of diagnosis making complete excision unlikely.

External beam radiation therapy is recommended for dogs with nonresectable, incompletely excised, or metastatic thyroid carcinomas.   Median survival times of two years or more have been reported.  Where available, radioiodine treatment can be considered.  It has reported median survival times of thirty months.  Radioiodine therapy has the advantage of being able to target tumor tissue regardless of the tumor location such as ectopic thyroid tumors and metastatic lesions.  Radioiodine therapy also has the advantage of being able to do sequential treatments in dogs that develop tumor recurrence.  This cannot be done with external beam radiation therapy due to risk of adverse effects.  Potential adverse effects of radioiodine therapy include hypothyroidism and life-threatening myelosuppression.  Radioiodine therapy requires hospitalization post treatment until radiation exposure rates are sufficiently low.  Another limitation is that it can only be performed at a facility that is equipped with handling radioactive iodine contaminated waste products from treated dogs.  Combined surgery and radioiodine therapy has a reported MST of thirty-four months.

When a dog has a palpable cervical mass, thyroid carcinoma should be at the top of your differential list.  Early diagnosis can lead to a better outcome, however, good treatment options are available for dogs with nonresectable tumors and metastasis.  Ultrasound examination will confirm thyroid origin, aid with the diagnosis, and help with surgical and other treatment planning.